Frank got the call a month ago, and he said yes to Laura Bilotta when she asked to bring twenty-four single people to our historic Parkdale restaurant at the start of November 2016. He said yes because over the years Amico’s Pizza has been the meeting place for many married couples; we frequently get people returning to where it all started for them a decade ago or longer. If you’re one of those people who met your lover here in the nineties or 2000’s please don’t hesitate to contact us for a deep discount anniversary pizza!

As usual, our man Frank Horgan ran the kitchen and made sure that everyone who participated in the event and who came back into his realm to make their pizza had the correct amount of dough, and applied the proper amount of sauce, and sprinkled on enough seasonings, and had full access to countless fresh ingredients.  That’s all they needed as Frank took care of all the cooking. Here’s Mr Horgan with his son beside him at the top of the night. 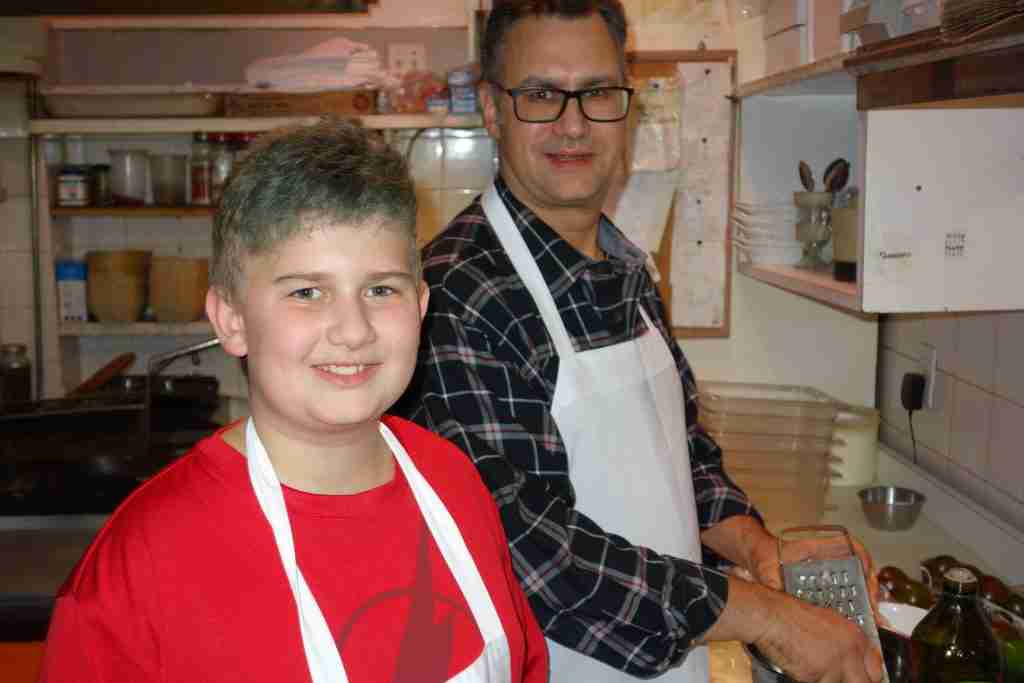 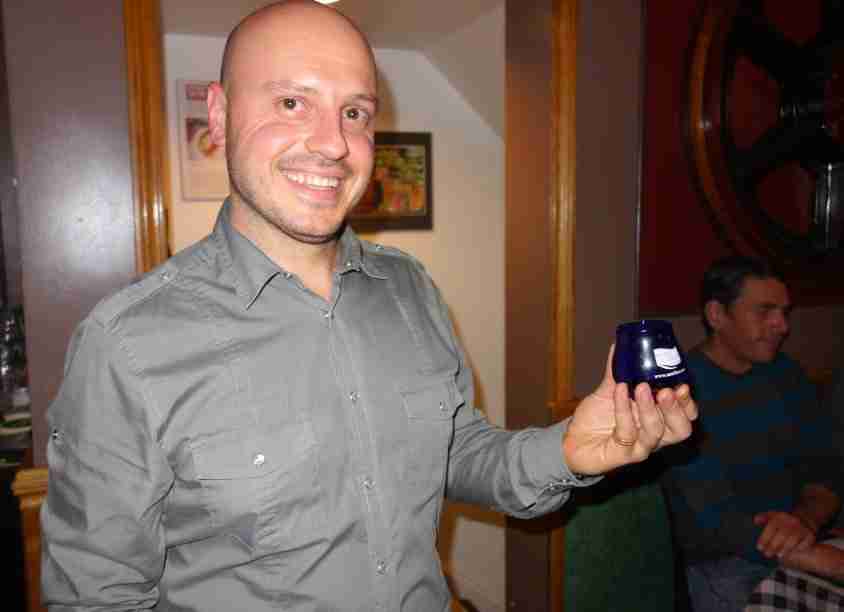 Angelo Tramonti, the boss at a local olive oil importing company Sarafino Foods brought samples of four different oils from four different olive tree varietals and gave the audience an amazing taste experience.  He took everyone to Italy in their mouths for a moment and won our hearts forevermore with his knowledge and perspective.

By putting the four different oils in four different coloured shot glasses, Angelo was able to demonstrate the subtleties of the product in a way that many of the attendees had never experienced before. Plus he gave each participant an unopened taster bottle so they could go home and impress their family and friends with their knowledge. The screw cap bottles are resealable so they can do this many times. 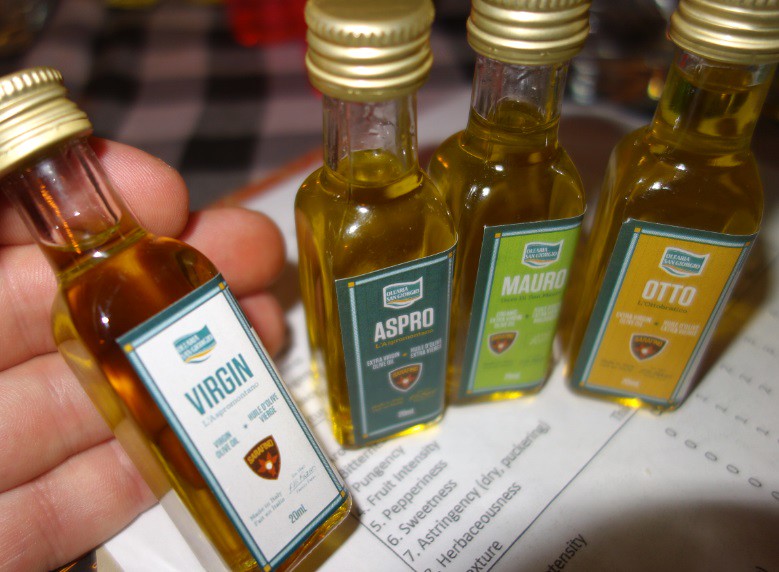 Angelo offered the group four different olive oils to try, but not before first telling them that they’ve probably never tried real olive oil before in their entire lives. He used the outrageous comment to spark a discussion on the fraud that’s happening on supermarket shelves today regarding the way the Canadian government lets olive oil distributors use misleading labels so consumers don’t realize they’re buying inferior product. There needs to be more public awareness about this issue and Angelo is on a mission to educate consumers and demand change.

Meanwhile, back in the kitchen, each participant was given an apron and two minutes at the counter to add tomato paste and seasonings and then garnish their own very personal pizza anyway they liked. 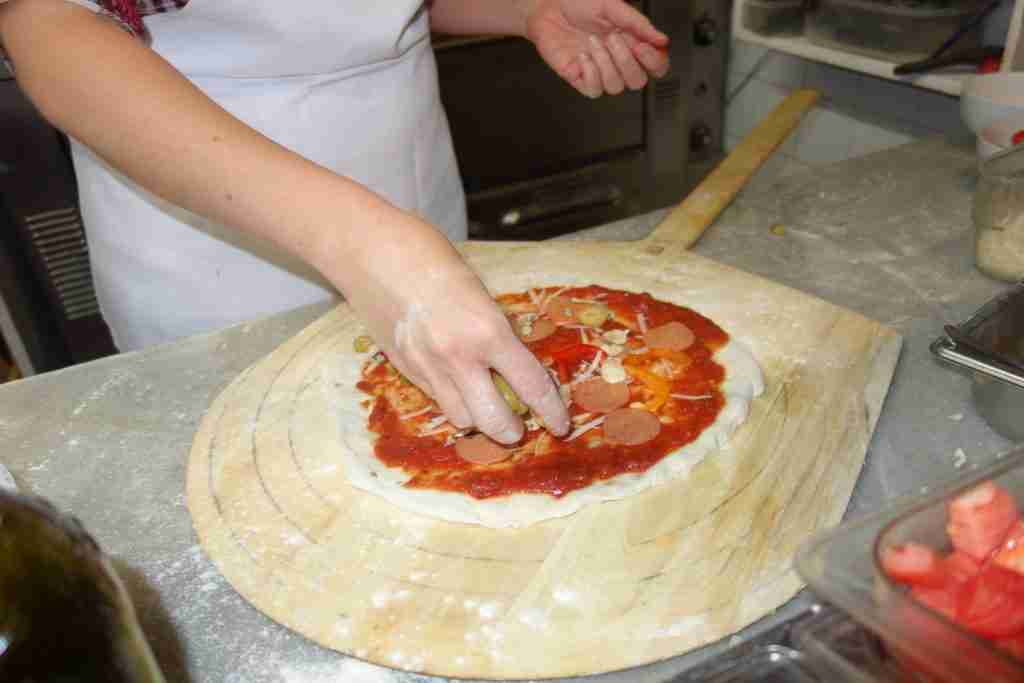 There was a massive array of toppings for the pizza-making participants to choose from, including a variety of exotic ingredients like capers, pickled onions, asparagus, basil and other specially imported meats and cheeses in addition to the arsenal of regular toppings present at the counter. At the end of their chef experience, each artist had to sign the pizza somehow, and make some distinctive feature so they could identify their work when it was cooked and brought out hot later on. 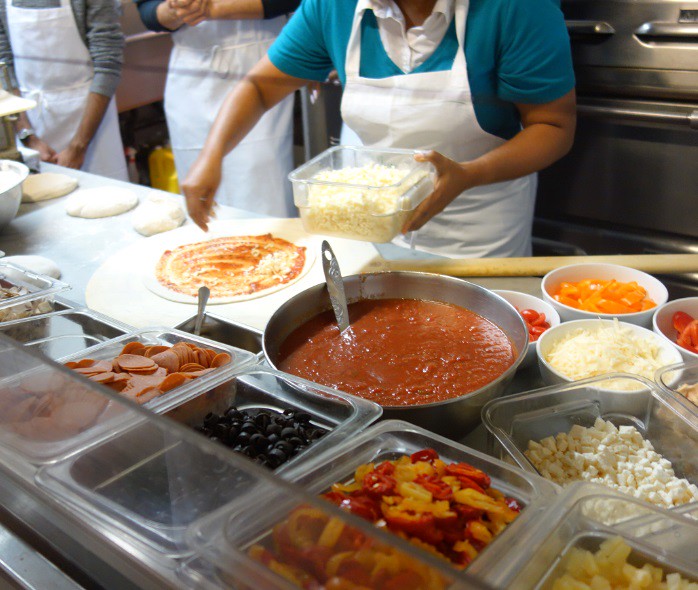 Each group took about ten minutes to complete their cuisine creations and there were six groups or twenty four individual pizzas made in total. 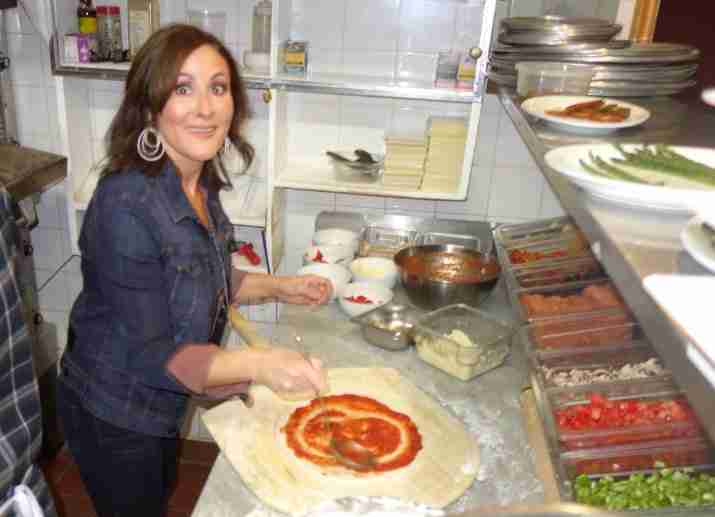 Twenty  five pizzas actually, as Laura went last and made a wicked Za with everything she liked most, and Frank was truly amazed at her creativity.

Her pizza creation, the Single in the City pizza (for two) may be featured on the Amico’s Pizza menu next summer, so I wont give away the ingredients now as we’ll likely have a patio party and debut it.

Frankie guarded the custom pizzas waiting to be cooked as they stacked up behind him in the kitchen. Now with Laura’s pizza ready to go, the pies were loaded into the oven six at a time to be finished and served hot to the waiting crowd all at once. 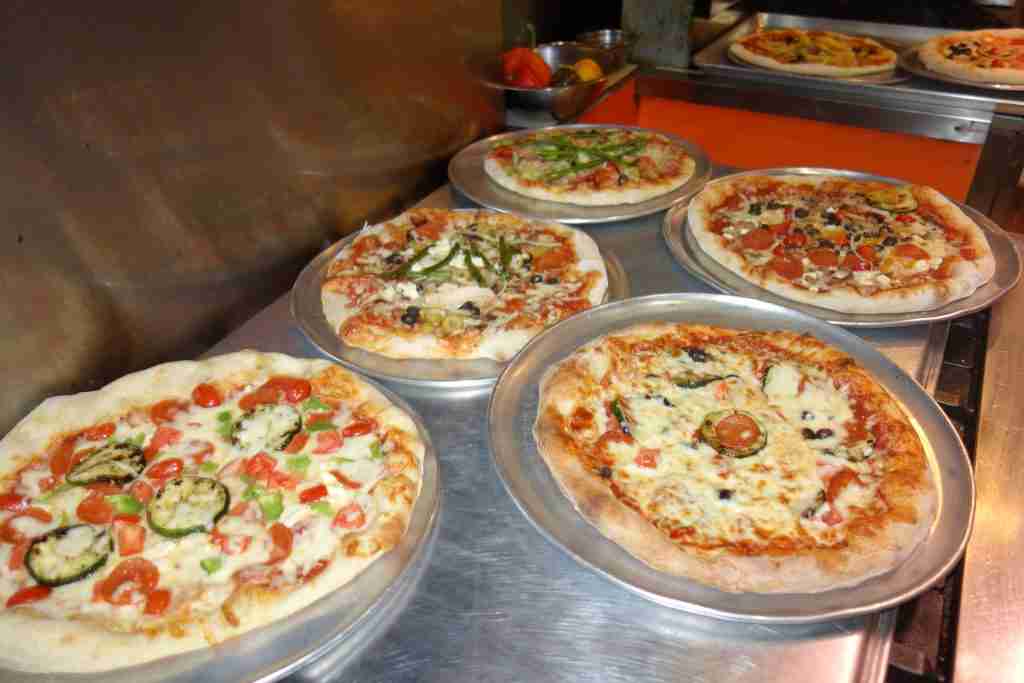 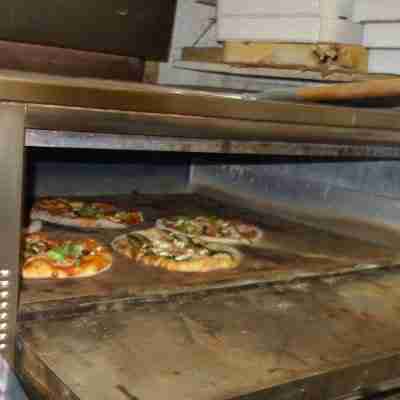 As Angelo wrapped up the olive oil tasting in the main dining area, the smell of cooked pizzas wafted through the restaurant and drove everyone crazy.

As everyone knows our legendary Italian eatery also has a back patio and the smell o9f pizzas had one couple walking through the back lane stop and ask if it was possible to buy a pizza from a participant!  I’m not sure if that attendee sold their pizza but regardless our events do impact the neighbourhood.

Frank had been half baking the pizzas just to get them started, and now finished the pies off in a group bake to slice them and send them out to the waiting chefs. The hungry event attendees lined up at the bar to claim their work and eat and share their pizzas while they were still piping hot. 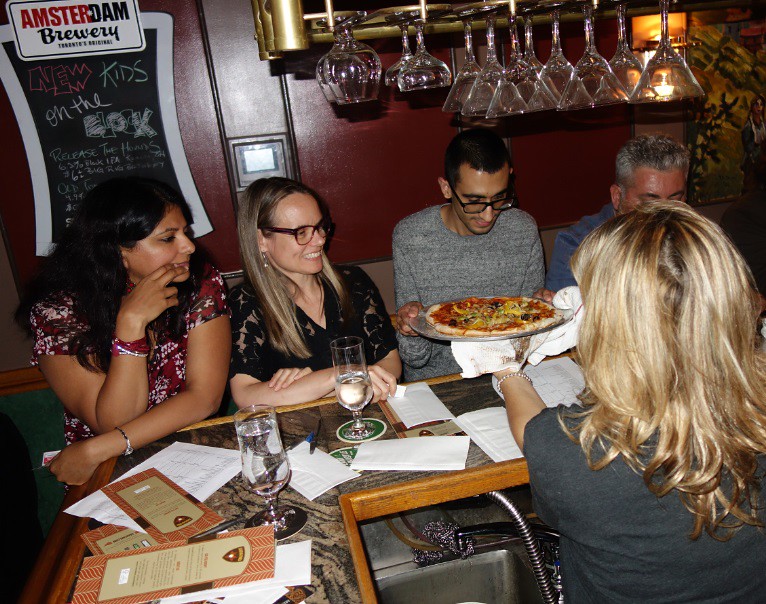 After that the evening came to its delicious conclusion with everyone mingling, sharing and eating their pizzas.

As mentioned earlier Angelo gave everyone four small olive oil tester bottles to take home with them and these combined with the left over pizza slices made the event very worthwhile for attendees, some of which also collected phone numbers !